8 Steps to Getting Organized: Secrets to beating family clutter


Secrets from a professional organizer

Clutter and depression are linked says a new book Life at Home in the 21st Century. “Our data suggest that each new child in a household leads to a 30-percent increase in a family’s inventory of possessions during the preschool years alone,”  say the authors. They authors primarily looked at dual income families but across the spectrum in race, jobs, and even income (all in L.A.). The authors surmise that these parents get to spend so little time with their children that they fill the void with stuff and are so exhausted from work and after-school related activities, that no one takes the time to sort and manage the stuff.

North American families have become extremely child-oriented says professional organizer and project consultant, Maureen Gainer Reilly, of GO Consulting. As a mother of four young children, a business owner, and with the experience of working with nonprofits that serve the regions poorest and individuals representing some of the world’s richest, her experience is vast.

The biggest take-away is that kids Play More, Fight Less, and face Less Depression with LESS STUFF. A lot less. AND that families are happier and run more smoothly when PARENTS TAKE CHARGE.

“Rich or middle class doesn’t matter. Kids now have too many toys. The volume is higher and the quality is lower. Just like when adults get overwhelmed, kids also get overwhelmed with too many choices and too much stuff.  If kids have to manipulate or move to get to something they want, they will give up and say they are bored.”  This means, that the more stuff kids have the less they will play. It’s not just that if they have 10 toys they will play less with each one, it is that actually the more toys kids have the less they play at all. This made sense to me as I have read research about adults and that once we have more than something like seven options (think the grocery store with seven different types of apples) we become incapable of choosing and many will just forego the apples altogether rather than entering the brain chaos of trying to choose at that point. The same thing happens with kids.

“Whoever you are, you can half the stuff you have.”
Just how true this is didn’t really come home to me until I started spending part of the year in Guatemala with my kids. Indeed, kids there do not have toys, or barely have toys, and guess what they play even more than children here. So, every year I go now, I take a fraction of what I did the year before. This year, I took two stuffies each for my children, an art box, a small box of figures or similar, and one dress-up outfit and it still felt like too much. However, my kids play twice as much while we are there than they do at home: same kids, same everything. They also play outside more and with “toys” they have fashioned out of sticks and other found objects.

“Only keep toys or things that are thought-provoking: dress-up, blocks, legos. Kids love them and they are good for varying ages: blocks to a baby are totally different to blocks to a five-year old and they will keep playing with the same toys in different ways.
You can get rid of all those big plastic toys where the ball goes in and then it falls out.”

“Don’t ever ask your children if they like a toy (they like everything), or to pick what they keep or get rid of. Instead say: ‘This is the red basket, pick your favourites and the rest we are going to give away. Give them something to fill.  Take that example and multiply it across the playroom: a big bin of blocks, race-cars, dress-up, etc.’ The containers can help you keep your system on track as well.”

Choose containers suitable for your child to manipulate. “A lot of products out there are for parents to manipulate. Look at your kid’s school if you need a model: things are on low shelves, they are easy to handle for kids, if a kid can’t lift or pick up the bin themselves they won’t clean up or play with it. It’s also easier without lids on them.”

“Habits of wanting a lot of stuff are learned.” That means they can be unlearned and it also means you can teach your child differently. “Just because the kids balk at it doesn’t mean it isn’t a valuable lesson. It is pretty painless to do it so that kids learn when they are young: give them a little bit of control in the process but make it clear-cut; make it easy.”
She also says that it is often the parents that bulk at getting rid of something. (But that was my favourite toy growing up, we must keep that!) In that case, Maureen recommends this little cheat: “Put it in a box and put it away for some time and see if you all are okay without.” We have a number of boxes in the attic that I might never be okay without, but that I’m not burdening my children with. We also pack up a box of special things that come out just at Christmas/Hannukah time (like seasonal books and games), for Halloween, and even for summer. This helps keep things exciting and keeps the children’s play spaces uncluttered.

“Don’t give many choices. Kids are a lot more capable then you think: if you observe them at their school they are taking things out on their own and cleaning them up afterwards. You will be surprised what they can accomplish in a structured environment.
If your toy room look cluttered and chaotic, then it looks like that for the kids.”

“Another old school rule: if you want to play with something else, you have to first put away what you are playing with. They can only do that, however, if you have set-up a system so that it is easy for them to manipulate and be neat within in. Does the school call home and say your child won’t put their stuff away?” No, because the school has set up systems where they can be successful.

It really does work. I’ve noticed that my children do better when they have four crayons to use during drawing time versus that huge package of 64, so I set them up for success by just giving them four crayons. Likewise, my children are happier when they don’t have all of the six million books out on their bookshelves at one time. I still have to run and hide a few boxes of miscellaneous stuff everytime Maureen comes for a visit, but we are getting closer and her guidelines will help you get closer to a neater house and more harmonious play as well.

One response to “8 Steps to Getting Organized: Secrets to beating family clutter” 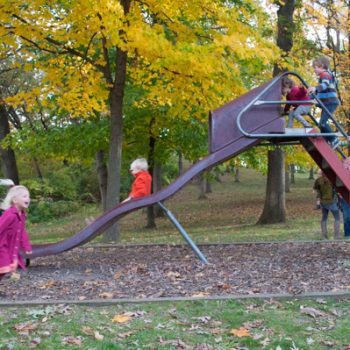